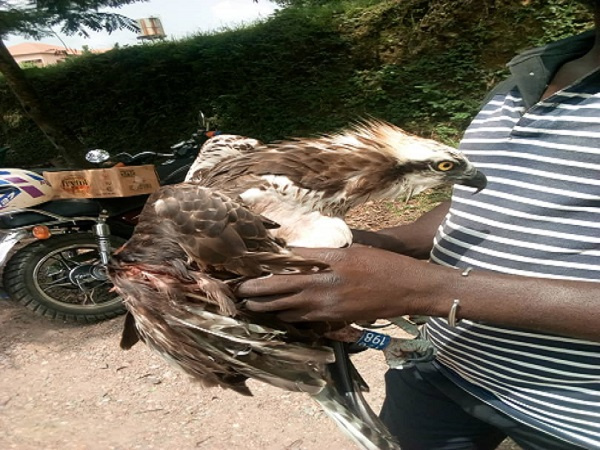 A strange bird from London in the UK has been found in the Ellembelle constituency of the western region of Ghana.

The identity of the bird was discovered by members of the constituency community when they realized that the bird had an address system inscribed on a metal bracelet indicating where it came from.

Wondering what to do, community members who found the bird and were mesmerized by the find then reported the issue to Ellembelle’s lawmaker, Emmanuel Armah Kofi-Buah.

They also reported the matter to the Wildlife Division of the Elembelle District Forestry Commission who immediately took custody of the visiting bird.

Unfortunately, the bracelets appear to have injured parts of the bird’s body, possibly due to the long trip from Europe to Africa or the bracelets’ long stay on the paws.

Member of Parliament for Ellembelle, Emmanuel Armah Kofi-Buah decided to publicize the news ostensibly to reach the original owner (s) of the bird in the world.

Inscriptions found around the bird’s paws showed that it may have come from a museum in London, hence the lawmaker’s determination to spread the news to reach nooks and crannies of the world in order to create the necessary awareness. for the owners of the bird bird to possibly come forward for reclamation.

Many Ghanaians, especially bird lovers, said the visiting bird could have followed the harmattan blues on the African continent and ended up in Ghana, which is currently experiencing the severity of the harmattan with an impact severely affecting social and economic activities in the northern part of the country.

The harmattan period often signifies the alteration of the year. An indication that the continent was currently experiencing bad weather in the middle of the dry season.

The characteristics of the harmattan include the hazy, dry and terrifying weather in the atmosphere, sometimes blocking the horns with nature and creating anxiety among the creatures and all living things living in the affected jurisdiction.

Harmattan season induced PH in broilers without obvious clinical signs; harmattan can compromise the welfare, health, productivity and meat quality of birds, effects which scientists believe can be enhanced by AA. Harmattan season runs from November to early March in the Gulf of Guinea.

ICBC tried to sell its website address to a Chinese bank