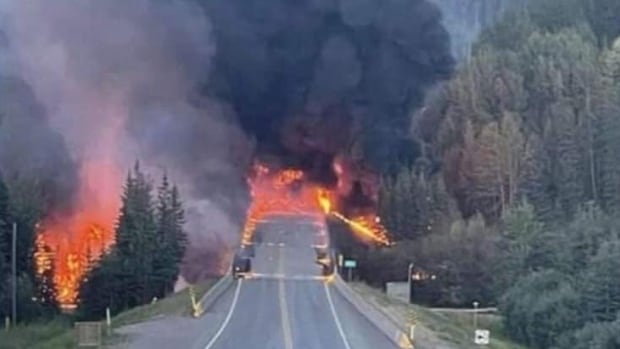 Thursday’s crash closed the road at the Sikanni River Bridge between Fort St. John and Fort Nelson. The highway is now open but only to passenger vehicles. Traffic is carried on a single alternating lane.

sergeant. Chris Manseau of the British Columbia RCMP said the tractor-trailer involved in the accident was carrying condensate – a byproduct of liquid natural gas – when it skidded into the bridge’s concrete barricades.

He described “massive flames and lots of dark clouds”.

“[Responders weren’t] able to get to the truck or the bridge or the road to even see what had happened in the first place until those were dead a lot but apparently the heat from that collision was very detrimental to the road and at the bridge.”

According to the police, the driver died in the accident. The pilot’s name has not been released.

The Fort Nelson and District Chamber of Commerce told CBC News that some grocery stores in the community were running out of supply and had to temporarily close. Food deliveries were due to end on Tuesday.

Traffic is always slow in the area. The highway is open to passenger vehicles and some commercial traffic via a single alternating lane. Commercial vehicles weighing more than 15,500 kg are prohibited. There is no possible detour in the area.

Meanwhile, investigators continue to work at the crash site to assess the condition of the bridge.

“The bridge needed to be reviewed before we could allow traffic to cross it,” Manseau said.

“So had to contact the engineers to look at the bridge, obviously once the fires were out and it was safe enough for them to get to the bridge as well, so a lot of delays for that main corridor.”

There is no indication of how long the investigation will take or when the freeway will fully reopen.

How to Impress Management Teams and Shareholders: Predictive SEO