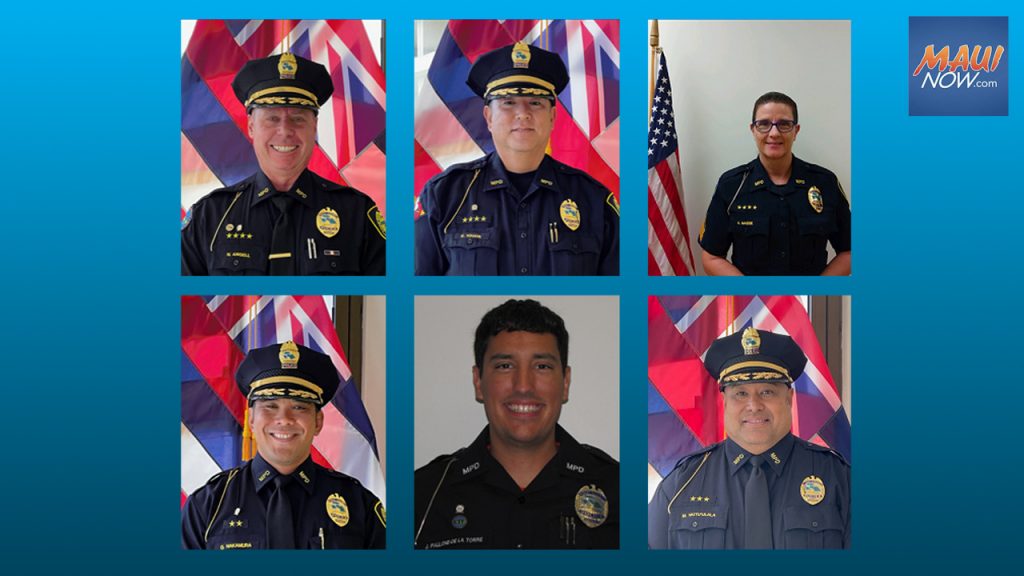 The Maui Police Department today announced the promotion of six sergeants to lieutenant. All promotions are expected to take effect on November 16, 2022.

Lieutenant Angell and his wife Anela have two children.

In 2014, he was promoted to sergeant and served in the Kihei Patrol District prior to his final assignment as supervisor of the Traffic Division’s Vehicle Homicide Unit.

Lieutenant Kimberly Massé joined the department in 2001, where she began her career as a Police Officer I in Wailuku Patrol District, followed by a transfer to Lanai Patrol District. She spent eight years as a school resource officer at Lanai High and Elementary School before being promoted to sergeant in 2010. She served a year in the Lahaina Patrol District before returning to Lanai.

She and her fiancé Kenneth are proud owners at Lanai and love the outdoors.

THE ARTICLE CONTINUES UNDER THE AD

Lieutenant Grant Nakamura joined the department in 2009, where he began his career as a Police Officer I in the Wailuku Patrol District, until being assigned in 2014 to the Narcotics Vice Division.

In 2016, he was promoted to Sergeant and served in the Molokai Patrol District, followed by a transfer to the Lahaina Patrol District. Lt. Nakamura’s last assignment was as supervisor of the crime reduction unit since 2018.

He coaches wrestling for Baldwin High School and Nakamura Wrestling. He and his wife Nichole share seven children.

Lieutenant Jeremy Pallone-De La Torre joined the department in 2011, where he began his career as a Police Officer I in Kihei Patrol District.

During his 11 years of service, his past assignments have included the Communications Section, Wailuku Patrol District and the Juvenile Crime Prevention Division as a Juvenile Investigator.

THE ARTICLE CONTINUES UNDER THE AD

In 2018 he was promoted to Sergeant and served in the Lahaina Patrol District and later in the Lanai Patrol District where he served for two years. Lt. Pallone-De La Torre’s most recent assignment was as a detective in Wailuku’s Criminal Investigation Division.

He is a Certified Law Enforcement Fitness Specialist, helping teach police recruits various blocks of instruction. He is also a high school cross-country and track and field coach at Kamehameha Schools Maui, volunteers for the Maui Police Activities League, helps with Special Olympics Tip-a-Cop, and is the coordinator of the Forces Torch Run. order on the island of Maui. .

He and his fiancée Sabrina have three children: Darius, London and Sebastian Lucky.

Lieutenant Michael Vaitu’ulala joined the department in 2008, where he began his career as a Police Officer I in the Wailuku Patrol District.

During his 14 years of service, his assignments have included Molokai Patrol District, Wailuku District Community Policing, and the Criminal Intelligence Unit.

In 2019, he was promoted to Sergeant and served in the Communications Section, Lahaina Patrol District, Emergency Enforcement Specialty Detail, and as a Detective in the Criminal Investigations Division. Lt. Vaitu’ulala’s most recent assignment was as Acting Lt. Commander of the Criminal Intelligence Unit since November 2021.

The Maui Police Department congratulated each of those promoted, saying, “Their hard work and dedication to our agency and our community is greatly appreciated.