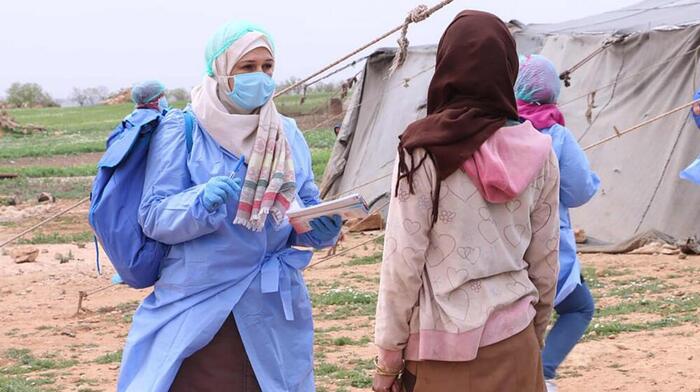 Sexual violence in conflict: neglected, under-reported and in danger of being “normalized” – World

UNITED NATIONS, New York – While the militants boasted of dividing up the girls, Khetam*, a Syrian refugee in Iraq, feared for her life. “Two commanders had chosen me and my friend as wives,” she told UNFPA. The so-called “marriage” would mean rape and control for as long as activists wanted. “When we objected that we were too young to marry, they beat and tortured us for most of that night, until we had no choice but to give in.”

Sexual violence in conflict situations remains widespread and systematic, according to a recent report by the UN Secretary-General, fueled by “growing inequality, increased militarization, shrinking civic space and the illicit flow of arms light and small caliber, among other factors”. Conflict-related sexual violence – which includes assault, rape, forced marriage, trafficking, sexual slavery, forced sterilization, forced abortion and other forms of sexual coercion – is used to instill fear , pain, suffering and censorship in its targets. Survivors, along with their families, face long-term consequences, from post-traumatic stress, unwanted pregnancies, sexually transmitted infections, and social stigma to the threat of retaliation if they consult a lawyer or report the attacks. .

As crises proliferate and conflicts drag on, more and more women and girls are telling UNFPA that violence against them is becoming “normalized” – a disturbing and growing collective acceptance of this crime, usually as protection mechanisms and the legal liability of perpetrators crumble in the chaos of conflict.

Maya*, a Syrian refugee in Jordan, described how “many of my friends have been through this [gender-based violence], some daily. They are continuously harassed, beaten and forced to marry so young when they don’t want to… this ends up hurting them and sometimes killing them.

Access to health care, including psychosocial and sexual and reproductive health services, is severely disrupted in conflict situations, while the humanitarian provision of essential services is fraught with pitfalls. From widespread instability to destroyed roads and infrastructure and obstructed access, those most in need are often the hardest to reach. Even when services are available, survivors may be afraid to seek them out of shame or fear of being ostracized by their communities, or even punished by their abusers.

In South Sudan, which has skyrocketing rates of sexual violence as conflict rages, simply leaving home to seek out basic necessities is rife with dangers. For 14-year-old Achol*, fetching water was enough to put his life in danger. “When I was at the tap, a strange man walked up to me. He grabbed me and stuffed a t-shirt in my mouth, dragged me to an abandoned building where he raped me and threatened to kill me.” His attacker has not yet been apprehended.

Entrenched gender inequality is as much a driver of sexual violence as it is an obstacle to its prevention. The threat of violence often robs girls of their education, fearing to lock them away at home to take on increasingly onerous household and care chores. Survivors can suffer debilitating injuries and be rejected by society and their families.

UNFPA Executive Director Dr Natalia Kanem described the prevalence and lack of accountability for sexual violence in conflict as being “due in large part to the persistence of grossly discriminatory ideas, including men thinking that they are entitled to the “spoils” of war and that women and girls are usable and disposable.

The challenges of reporting on a “silent crime”

For every survivor able to tell their story, there are thousands who will forever remain silent – ​​or silenced. Sexual violence is a grossly underreported crime, even in times of peace. In conflict situations, barriers to reporting only multiply. Many citizens, journalists and humanitarians who promote accountability or succeed in reporting these crimes to the world are also persecuted for their work.

UNFPA is launching a campaign to amplify the voices of survivors and counter the risk of normalizing violence against women and girls, especially in crisis situations. The human rights of survivors must be at the heart of all responses to sexual violence, with sexual and reproductive health and information being a non-negotiable part.

UNFPA’s programs in crisis settings supported 2.3 million survivors of gender-based violence in 2021 and helped some 1,000 health facilities in 38 countries provide specialist care. Staff from the agency and its partners were on the ground around the world when crises erupted and needs grew, including for supplies of post-rape kits and emergency contraception.

But the grim reality on the ground for the most vulnerable stands in stark contrast to the ambitions of organizations like UNFPA working to help them: experts say the already shocking statistics on sexual violence are only scratching the surface true numbers still unknown.

Calling on the international community to mobilize immediately in light of the horrific reports of sexual violence stemming from the war in Ukraine, UN Special Representative Pramila Patten said: “An active battlefield is never conducive to precise “accounting”. […] if we wait for concrete data and statistics, it will always be too late. We don’t need hard data for a large-scale humanitarian response.

* Names have been changed for privacy and protection reasons.