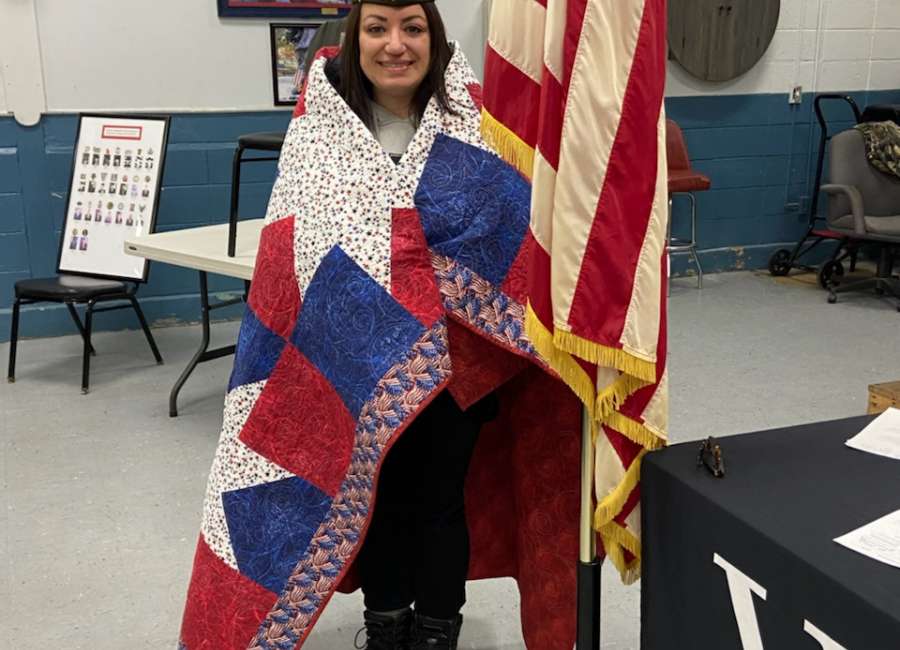 Six quilts were donated to veterans by Coweta County Quilts of Valor to Cowetan Veterans throughout March.

In addition, she completed: Technical training for AFSC Operations Intelligence at Goodfellow AFB, TX. RAF Molesworth, UK working for the Joint Analysis Centre. She changed command at RAF Molesworth to be the first junior airman to serve with the Intel Fusion Center alongside military representatives from all NATO forces. From there she was to Eglin AFB, FL.

Lasting freedom. She was stationed at MacDill AFB, FL, went to TDY in Spain to support Operation Unified Protector, after which she separated from that duty station.

Mrs. Williams received the following award: Airman of the Year at RAF Molesworth. Double marksmanship as a staff sergeant before being deployed to Afghanistan. Joint Service Commendation and Joint Service Achievement Medals while deployed and for service in England. She received a four-star coin straight from the pocket of General David Petraeus at HQ Kabul when he was commander of ISAF, after giving her a briefing in 2010, as well as a three-star coin from the General McChrystal during the same deployment.

He entered the Air Force in Amarillo, TX and went to technical school at Sheppard AFB in Texas where he trained as an aircraft mechanic. He was in Southeast Asia in 1969 and in Korea in 1970.

She came out with the rank of E5.

He was stationed at Fort Benning, Georgia, in the 7th Cavalry Division.

His duty station was at Fort Sam Houston in San Antonio, TX. He was an instructor and medic at the 47th Combat Field Hospital, the last in the United States. He trained doctors and nurses for Vietnam. He also worked in the Napalm and Burns Unit serving those who have returned home.

He was dismissed at the grade of E5.

Quilts of Valor are handmade quilts that are machine or hand-quilted by volunteers and awarded to service members or veterans who have been affected by war, according to the Quilts of Valor Foundation. Duvets are made to a specific size requirement, labelled, awarded and registered.

The Quilts of Valor Foundation was founded in 2003 by Catherine Roberts, whose son Nat was then deployed to Iraq. Roberts’ vision was of teams of volunteers who would give their time, materials and expertise to comfort and thank service members and veterans for their service.