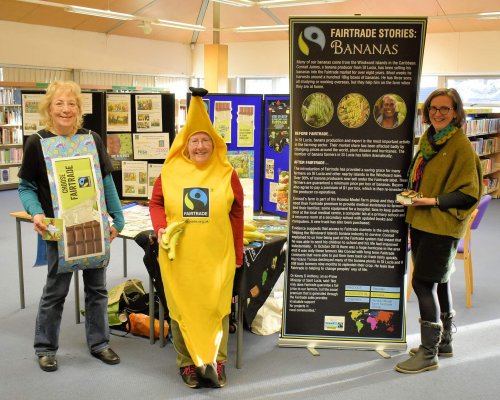 
Neston’s status as a Fairtrade town was on display, for all to learn about the movement, as well as sample Fairtrade chocolate and bananas.

Neston Library ran a week of activity last month, as part of Cheshire West and Chester Council’s focus on health and wellbeing – see the cover here.

Members of Neston Fairtrade Group were there on Wednesday 26th January, with displays of information about Fairtrade and how Neston became a Fairtrade town. Plus, chocolate and banana samples, board games and quizzes.

A little chocolate is known to be good for you and by purchasing Fairtrade chocolate, as well as other available products, the consumer has a direct impact on the health and well-being of producers.

The extra money from the Fairtrade Premium can fund better healthcare, education and be used to fight climate change.

The banana outfit is certainly getting attention and the praise goes to the Neston Fairtrade group, for raising awareness of the importance of buying Fairtrade products, to support farmers and producers.

CREDIT: Robert Clive. Pictured on the left is Margaret Heibel, Chair of the Neston Fairtrade Town Group, with Heather Swainston of the Chester Group on the right. Neston Councilwoman Brenda Marple looks fantastic in her banana outfit.

Flag this article as inappropriate

You must log in before you can do this! It is only a quick registration process to join the AMA network and completely free.