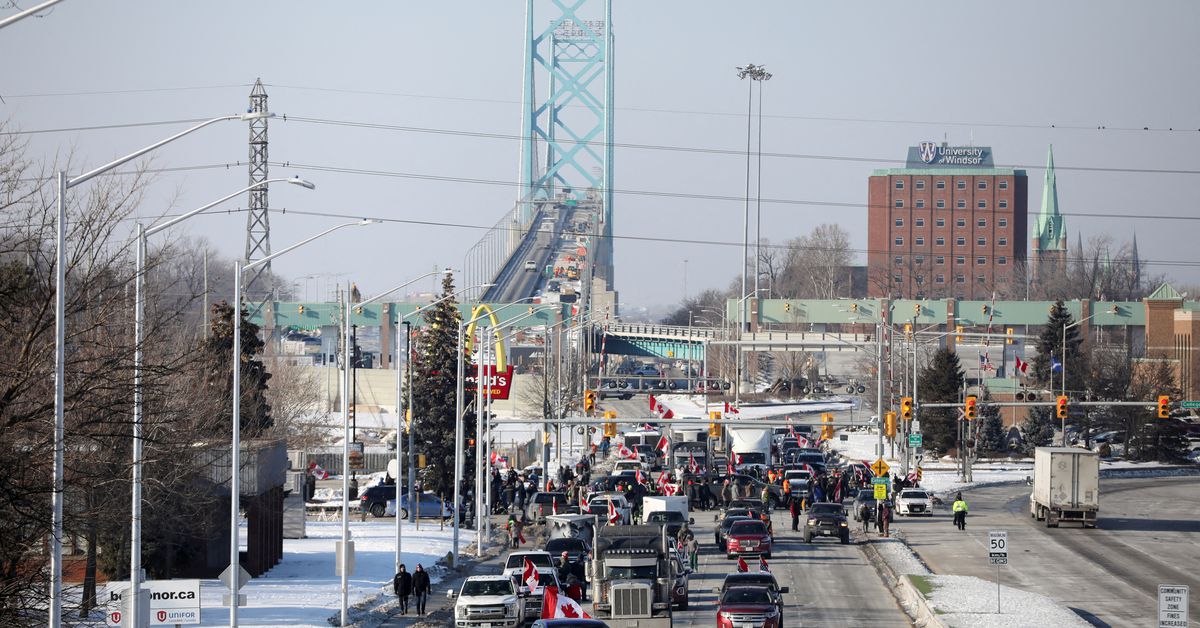 OTTAWA, Feb 8 (Reuters) – The busiest land crossing between the United States and Canada remained closed on Tuesday after Canadian truckers blocked lanes on Monday to protest their government’s anti-pandemic measures.

While two-way traffic was initially blocked, US-bound lanes have since reopened, Windsor Police tweeted. Canadian police also said Tuesday evening that another border crossing in Coutts, Alberta, had been closed by protesters for inbound and outbound traffic.

Drivers demanding an end to federal COVID-19 vaccination mandates for cross-border traffic began blocking streets in Canada’s capital, Ottawa, on January 28. Since Sunday evening, the police have slowly begun to regain control, seizing thousands of liters of fuel and removing a tanker.

Ottawa Deputy Police Chief Steve Bell told reporters on Tuesday that police had stopped many heavy vehicles taking part in the blockade. He said about a quarter of the 418 protest vehicles in the city center were carrying children and police were concerned for their well-being over the cold, noise, carbon monoxide hazards and the access to sanitation.

Canada’s Public Safety Minister Marco Mendicino told reporters he had been in touch with the mayor of Windsor and local lawmakers about the blocking of the Ambassador Bridge, linking Detroit, Michigan, to Windsor, Ontario.

“We will continue to work (…) to keep supply chains running across the Ambassador Bridge, as well as the workings of our economy,” he said.

Canada sends 75% of its exports to the United States, and the bridge typically handles around 8,000 trucks per day.

“It is clear that these disruptions have expanded their scope beyond the implementation of vaccine requirements,” said White House press secretary Jen Psaki. “We are of course in contact with our Canadian counterparts” on the blockade, Psaki added.

The owner of the bridge, the Detroit International Bridge Co, said international trade on the bridge should resume as quickly as possible in a way that reflects mutual respect, company chairman Matt Moroun said in a statement. .

The president of the Canadian Vehicle Manufacturers’ Association called for the blockade to be lifted immediately, saying “continued delays at the Ambassador Bridge risk disrupting auto production which employs tens of thousands of Canadians.”

Canadian Prime Minister Justin Trudeau appeared in public on Monday for the first time in more than a week after being infected with COVID-19, saying the protest must end. Trudeau reiterated on Tuesday that “we will continue to follow the science” when interim Conservative leader Candice Bergen asked Trudeau in parliament if he would follow the science and end the restrictions quickly.

Trudeau denounced the protesters’ tactics, but one of his Liberal Party colleagues broke ranks over the government’s hardline stance on vaccination mandates. Joel Lightbound called on the government to move away from divisive politics and present a clear roadmap for lifting pandemic restrictions.

Alberta has become the latest Canadian province to announce plans to ease pandemic restrictions. Premier Jason Kenney said starting Tuesday midnight, Albertans will be able to dine in restaurants and sit in entertainment venues without showing their vaccination passports, as part of a three-stage reopening plan. .

Quebec Premier Francois Legault also announced on Tuesday a gradual reopening of offices, businesses, bars and social activities in the province until March 14, while lifting restrictions on the number of visitors allowed in private residences.

Legault said a recent protest by truckers in Quebec City had not influenced his plans, but acknowledged that some people in the French-speaking province are fed up with the restrictions.

Saskatchewan Premier Scott Moe said the requirement to provide proof of vaccination or a negative COVID-19 test for businesses, workplaces and other public places will end on February 14.

Reporting by and Ismail Shakil Bengaluru and Anna Mehler-Paperny in Ottawa; Additional reporting by David Ljunggren in Ottawa, Allison Lampert in Montreal, Susan Heavey and Heather Timmons in Washington; Writing by Denny Thomas Editing by Jonathan Oatis and Lisa Shumaker