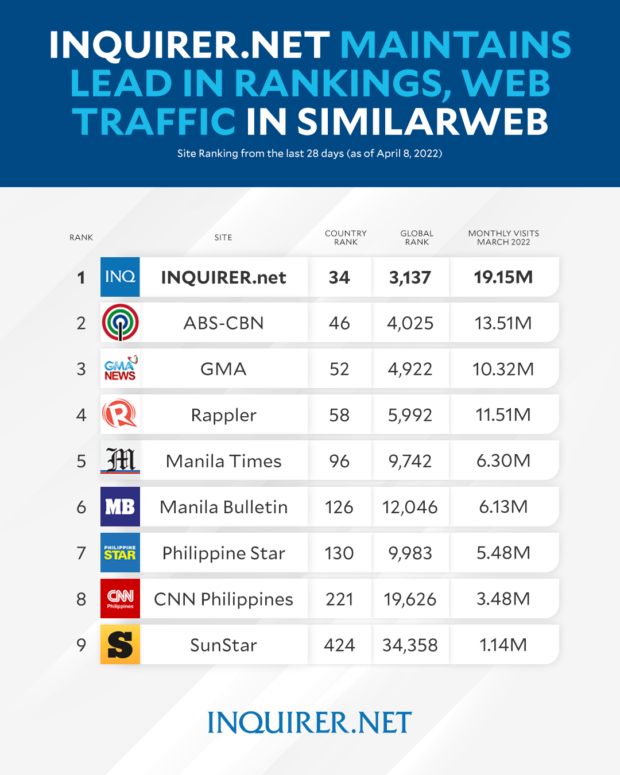 INQUIRER.net maintains its lead in rankings and web traffic in Similarweb

MANILA, Philippines – INQUIRER.net has maintained its lead in rankings and web traffic among news sites in the country, according to the latest data from web traffic analytics provider Similarweb.

Based on country rankings, data from Similarweb showed INQUIRER.net at 34th place, followed by ABS-CBN News websites at 46th, GMA at 52nd, Rappler at 58th. and The Manila Times at the 96th.

According to Similarweb, INQUIRER.net also topped monthly visits in March with 19.15 million, followed by ABS-CBN with 13.51 million, GMA with 10.32 million, Rappler with 11.51 million and The Manila Times with 6. .30 million.

In February, data from Similarweb also showed that INQUIRER.net topped other competing Filipino news sites in terms of traffic to its website in January.

Similarweb reported that INQUIRER.net was primarily in the lead in terms of daily traffic for desktop users, with an audience share of 27.99% from December 28, 2021 to January 23, 2022.

In terms of mobile phone user traffic over the same period, INQUIRER.net was only surpassed once by ABS-CBN, on January 16th. However, the audience breakdown showed that mobile users preferred INQUIRER.net, which achieved 30.57% audience share.

INQUIRER.net earlier announced that it has decided to engage the services of Similarweb for online traffic monitoring as well as guidelines for content and publishing strategies.

This decision was made because Alexa Internet is expected to cease operations by May 2022.

Inquirer Interactive Inc. Chairman and President Paolo R. Prieto also said the decision to operate Similarweb was due to INQUIRER.net’s desire to stay on top.

“The decision to switch to Similarweb is a necessity with the impending shutdown of Alexa. Alexa has served our needs for years, especially with its ranking which is a globally accepted measurement tool for our online traffic against our competitors. Prieto said in a statement.

“In looking for a replacement, we looked for two things. First, a globally accepted ranking that would be accepted by our stakeholders. Second, we wanted an innovative technology partner who would help us improve our knowledge and analytics as we seek to stay on top of the news publishing industry in the Philippines,” he added.