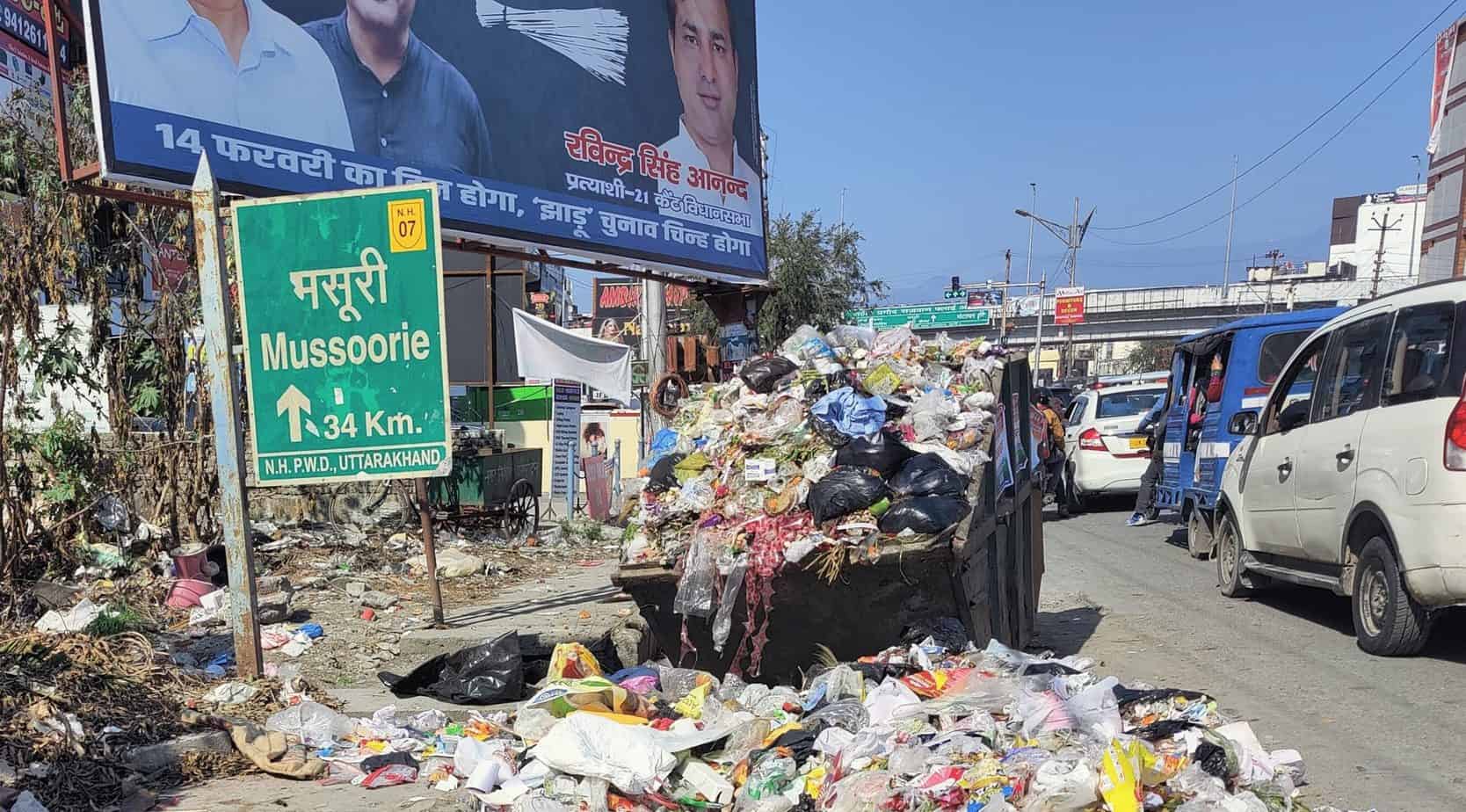 This was the world’s largest sanitation survey covering 4320 cities across India. The results, announced in November 2021, secured Indore the top spot as the ‘cleanest city’ for the fifth consecutive year.

The survey methodology examines cities and towns in two ways: a national-level overview for cities and a zonal overview for small towns. The evaluation was performed according to three parameters: service level progression (SLP); Citizen Voice and Certifications.

While the SLP focuses primarily on segregation, collection and processing aspects, the Citizen Voice component is citizen feedback. The certification metric ranks cities based on their freedom from waste and open defecation (ODF status). The total score is 6000.

The survey included 87 towns and villages in Uttarakhand. All together, they scored 1,531 points out of 6,000, which is 541 points below the national average of 2,072 points. Compared to other states, Uttarakhand was ranked 15 out of 28 on the statewide average of solid waste management rankings. And was ranked 16 out of 28 states on statewide service level certification and progression scores. Uttarakhand’s ranking on Citizens Voice was even lower, 18 out of 28 states.

The results gave a mixed bag for Uttarakhand’s six largest cities – Dehradun, Roorkee, Haridwar, Haldwani, Kashipur and Rudrapur. Ranked 82 out of 369 cities across the country in the 1-10 lakh population category, Dehradun has managed to enter the ‘Top 100 Cities’ category for the first time in five years. In fact, no city in Uttarakhand had ever achieved this rank in any of the previous editions.

Compared to larger cities, several smaller cities have more robust waste management models. Citizen awareness remains high and these cities have managed to constantly improve their performance. They were also able to generate resources from the sale of dry waste to collectors and recyclers. Muni Ki Reti near Rishikesh is a good example of a small town’s waste management success story. He worked hard to ensure waste separation and involve citizens in keeping the city clean.

While much attention was paid to Swachh Survekshan’s poor ranking, the results of two other national swachhata competitions went unnoticed. Not that the state has done better in these areas. Resource allocation, capacity building and citizen engagement are key to performing better in these competitions.

Dehradun ranked 52nd out of 72 cities in the 3-10 lakh population category in the Safai Mitra Suraksha Challenge. Apart from this, 82 other cities participated in the below three lakh population category, including six from Uttarakhand. Roorkee at 33 and Haridwar at 79 were the best and worst performing towns. Overall, the state ranked 14th out of 20 participating states.

No city in Uttarakhand has managed to achieve a 5-star or 3-star rating in this category, even though 152 cities across India have received 5-star and 3-star ratings. Three cities, Dehradun, Roorkee and Muni Ki Reti, out of 92 city local bodies, received only one star.

Nationally, 299 cities have been classified as waste-free. The nine cities that got a 5 star rating were Indore, Surat, New Delhi City Council, Navi Mumbai, Ambikapur, Mysore, Noida, Vijayawada and Patan.

This survey was launched by the Ministry of Housing and Urban Affairs (MoHUA) with the overall aim of finding the most livable and successful cities in India.

The EoLI is an assessment tool based on four pillars: quality of life, economic capacity, sustainability and the citizen perception survey. The first three represent 70% of the weighting. Citizen perception was given a weighting of 30%.

Rfind out more: Most of Dehradun’s e-waste ends up with unauthorized recyclers; here’s why

Dehradun ranked 29th out of 62 cities in the under one million category with a score of 52.41 out of 100 points. In the sustainability pillar, Dehradun was ranked 15th. He was 33rd in the citizen perception pillar, 34and economic capacity and 41st in the quality of life pillar.

The EoLI is important from the perspective of the Sustainable Development Goals (SDGs), which is another area of ​​concern not only for Dehradun but for the entire state.

This Index was launched in addition to the EoLI. It aims to simplify and assess the complexities of local governance practice and to promote transparency and accountability. It examined local government practices in municipalities in five areas: services, finance, planning, technology and governance.

Dehradun performed even worse in this segment and ranked 47th out of 60 cities in the under 1 million population category, with the worst being 59th.and in technology.

MoHUA, in partnership with the National Institute of Urban Affairs (NIUA), established the Climate Center for Cities (C-Cube) in June 2020 with the aim of institutionalizing climate actions across the country. Understanding the need for sustainable urban planning and climate-informed development actions, the CSCAF was a first-of-its-kind self-assessment framework on climate-relevant metrics with the aim of mainstreaming climate actions in current and future urban development policies, programs and projects. .

A total of 126 cities including 100 smart cities, capitals and other cities undertook the assessment in 2020. Dehradun is the only city in Uttarakhand to have participated in CSCAF 2.0.

The cities were assessed on five themes which included 28 indicators – energy and green buildings; urban planning, revegetation and biodiversity; mobility and air quality; water management and waste management. Cities have received stars for their climate actions, 5 stars to one star for progress, even though they have not yet conducted studies to inform the adoption of climate actions.

Dehradun received the following stars for each of the five themes. Three-star and two-star waste management for energy and green buildings. Of the other three, Urbanism, Green Envelope and Biodiversity, Mobility and Air Quality and Water Management, it received only one star. The city’s overall rating was a mediocre two stars.

The challenges of inadequate public transport, limited parking spaces and massive increase in traffic congestion are multifaceted and pose immense challenges on many levels that are sure to increase in the future.

The number of registered vehicles has increased by 750% over the past 20 years. As of December 2021, there were over 32 lakh vehicles registered in Uttarakhand.

Adequate, fast and safe public transport has failed to take off as the state lacks integrated, multi-modal transport planning.

The existing infrastructure is not able to keep up with the load exerted on the roads, overpasses, sidewalks and parking spaces. There is a severe shortage of highway buses in the hill districts.

Read more: Mumbai, that’s how we can fight traffic jams

Traffic police and UPES, a highly respected state university, conducted a joint study in 2019 which found that each vehicle was stuck for an average of seven to 20 minutes in a traffic jam in Dehradun daily. The study claimed that by 2025, there will be 15 lakh registered vehicles in Dehradun alone. In the case of a business as usual scenario, they further asserted that each vehicle would spend 90 minutes daily in a traffic jam at that time.

Traffic jams are common in plains like Roorkee, Haridwar, Dehradun, Rishikesh, Haldwani and Kashipur. The situation is even grimmer in hill towns like Nainital and Mussoorie. Frequent traffic jams on the road to Char Dham leave thousands of tourists and pilgrims stranded for hours.

There is an acute shortage of government and/or commercial parking in all towns and villages in Uttarakhand. Underground parking in shopping complexes has not taken off. Roadside parking is very common and this leads to frequent traffic jams.

The other major problem is that of illegal encroachments. These impact all aspects of public transport, traffic and parking. The condition of the trails in most towns is deplorable. In the few places where they are functional, encroachments have taken over.

As Uttarakhand embarks on an ambitious initiative to further promote its tourist destinations, the limited number of parking spaces is severely affecting its accommodation capacity to attract more tourists.

Air pollution data collection is limited to the six major cities of Dehradun, Haridwar, Roorkee, Haldwani, Kashipur and Rudrapur. Even in Dehradun, with an estimated population of over 12 lakhs, there are only three air quality monitors. It is only for the last two to three days that live pollution figures are shown in the city.

The state government must invest more to track, monitor, and implement air-friendly solutions in its cities and towns.

4 online loans that can help cover